Futurice’s Helsinki office was bustling with people in the last week of October. The practical Digital Product Weekend workshop, organized by The Shortcut, promised to bring the participants’ ideas to life by immersing them in the exciting world of ideation, prototypes, user testing and conceptual demos. These are the things I enjoy most about my work, so I naturally signed up for the event the second I heard about it. Goodbye free weekend, hello exciting ideas!

On Saturday morning, the participants were divided into nine versatile and well-balanced teams. For example, my team comprised of experts in fields ranging from marketing to human–machine interaction. Based on the round of introductions, we got along like a house on fire even though we hailed from wonderfully different backgrounds from all over the word: Finland, Italy, Yemen, and Malaysia.

The next step was to choose the problem we were going to tackle together. After several too-close-to-call rounds of voting, we decided to make the world a better place by solving an all too common issue: how to get kids to choose healthier snacks.

The challenge seemed to suit us perfectly – our team consisted of many childlike individuals, as well as a mother and a grandmother. We agreed that the most fun and clever way to approach the project was to gamify it – this also meant that we had a fun weekend in store for us since we could spend it sculpting the idea all the way to a Minimum Viable Product.

A working prototype is worth a thousand meetings, they say. This is how the host of the event, Futurice Designer Sebi Tauciuc summarized the many benefits of a prototype: you can play with it, get the idea approved by someone else, reduce risks, and communicate and understand the concept more in depth. The prototype saves you time and guesswork – and, best case scenario, money. The prototype allows you to notice weaknesses already at a stage when correcting them is still easy. The idea can be tested, fixed, and tested again, until it works as desired.

Testing the idea doesn’t necessitate visual fireworks. You can simply draw the prototype on paper or even construct it from LEGOs. It’s also easy to work on the prototype if you build it using pieces of paper that you can easily move around, add to and modify. You only need a pair of scissors, a few sheets of white paper, markers, tape and post-it notes. In our case, the prototype was the starting screen of the game and a few simple sample interactions with the player.

You can quickly and easily turn the idea fashioned on paper into a clickable prototype using your own phone and e.g. the POP – Prototyping on Paper application. For some added features, I recommend InVision. I use the application weekly as an easy-to-use tool for prototyping websites and online services.

How did it go?

Our emotions varied all across the board during the weekend, from hysteric fits of laughter to deep ditches of doubt. The hardest part was to crystallize the core idea of the game and its operational logic: the possibilities were endless and we were all new to game development, so we ended up testing and modifying the prototype continuously. The best way to keep going when we hit a wall was to use the prototype for user testing: this way, we could get immediate feedback from outsiders and brand new insights. After many rounds of iteration, we had caused a chaos of creativity and paper clippings in the conference room, but the most important thing was to go crazy and have fun – we were there by choice, during the weekend, after all.

Good team spirit quickly became the overarching theme. All ideas were welcomed with open arms. There are no stupid questions or bad ideas; there is only the team that dares to try out even the wackiest of ideas. This is especially important, because the line between bonkers and brilliant is sometimes all too fine to detect at the very beginning. Even the most insane “what-if-we…” can lead to a great idea when an excited teammate refines the concept a little further. 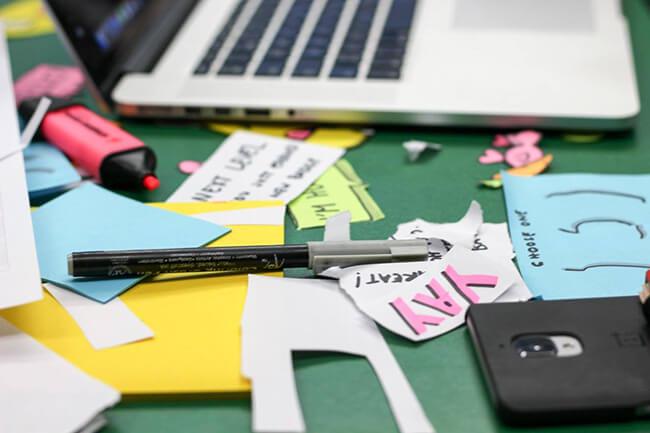 Looking back, it’s crystal clear that we always made great strides when things we worked on things visually: with the help of post-it notes or a whiteboard. Outlining the prototype on the wall while we discussed different game concepts helped us realize the benefits and pitfalls of each approach. Outlining was the most excellent way to explain and concretize the idea for the team. Oftentimes it also gave the quieter intellectuals in the group a chance to shine with their ideas.

In the end, we managed to give birth to a presentable demo of the Foodhero character that helps children learn about healthy nutrition when it’s fed. We put together the prototype by cutting the characters out of paper, and finally transformed the project into a clickable demo with the help of InVision. At the end of the weekend, we presented the game’s operational logic as the team improvised sound effects in the background. Based on the feedback, our energy – generated from amazing teamwork – was contagious. The end result completely caught us by surprise: the prototype was voted as the best of the weekend and we will continue working on the game at the Junction hackathon at the end of November.

Tips for generating ideas in a team

∙ Draw, test and think on paper
∙ Have fun – it shows in the end result
∙ Excitement is incredibly contagious
∙ You can learn something new from each team member
∙ Remember “Yes, but…”
∙ A bad team can ruin a good idea, but a good team can do wonders to a bad idea
∙ Always carry googly eyes in your pocket

Get to know our creation on InVision 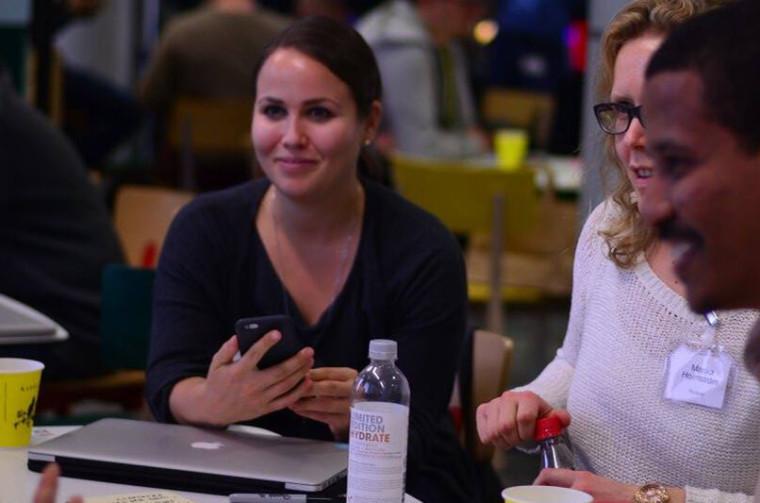